Jason Kilar (BSBA ’93), CEO of WarnerMedia and founding CEO of Hulu, paid a visit to his alma mater and met with current students at UNC Kenan-Flagler Business School to share his insights and encouragement with them. Prior to a large group presentation, Kilar provided undergraduate Kenan Scholars a highly engaging and impactful small group discussion opportunity. Below is a reflection of that experience from Kenan Scholar Alexandra Hatsios (BSBA ’23).

While it is common for notable alumni or regarded business executives to visit UNC Kenan-Flagler, it is not common for undergraduate students to get a private session, let alone an opportunity for an intimate discussion, with them. As an entrepreneurship minor, I have participated in several class conversations about the notable innovators that have created some of the most widely used products in society. One widely known entrepreneur and UNC graduate Jason Kilar, worked as a senior VP for Amazon and an analyst for the Walt Disney Company before he founded the streaming platform Hulu. Upon hearing that he was visiting UNC Kenan-Flagler, I was ecstatic. Further, when the Kenan Scholars were given the opportunity to meet in a private discussion, it felt surreal.

Each of us was thinking of potential questions to ask and hoping we could be one of the few students lucky enough to get our question answered in the 30-minute session. During the discussion, we inquired about both personal and professional matters, ranging from his hurdles faced in building his venture to his ability to communicate sustainability within his organization. He responded to each question gracefully, truthfully and sincerely. I posed a question that I have always wanted to ask a successful entrepreneur – what was a big challenge you faced and how did you handle it? He then explained that he had to manage believing in something that nobody else did, and thus balance this deviance from the majority. He detailed his deeply rooted passion for on-demand streaming from his childhood memories of missing his favorite shows when he arrived late from school — and how this passion evolved into Hulu.

His sincerity, professionalism and openness were very admirable, and I would consider this experience a highlight of my academic career at UNC thus far. 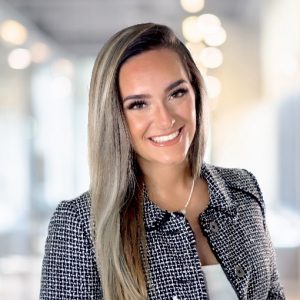